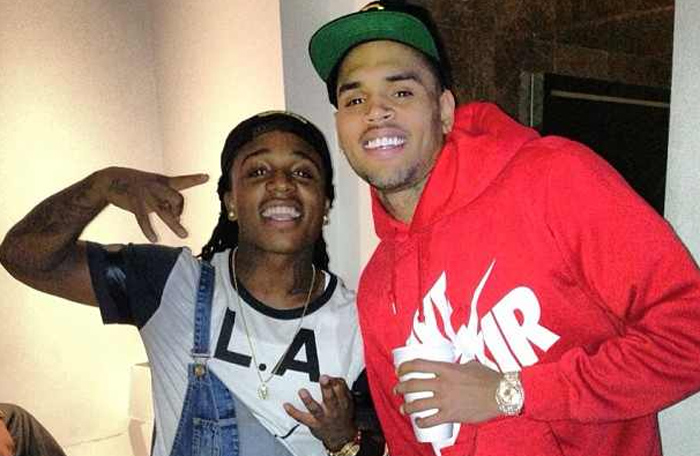 Chris Brown and Jacquees are joining forces. The R&B crooners have announced plans for an R&B-themed mixtape.

Sitting inside Breezy’s toy-filled studio, Breezy and Jacquees teased a snippet a new collaboration about threatening a cheating girlfriend. “You got no shame, stake out your hideaway,” sings Jacquees. “Bring that A.K. / Chopper sounds just like an 808 / I need more bass / You done fucked up / I’m crazy, this house a gun range.”

The Heartbreak on a Full Moon crooner adds to the deadly theme. “You better be gone, better be gone when I figure out your hideaway / I done found out you be going where that ni**a stay,” he sings. “…I’m about to catch a case / I’m speeding down the highway.”

Jacquees confirmed that a full project is in the works. “We dropping a mixtape fuck it,” he wrote, while Brown added, “we family so we gone fuck this r&b shit up.”

It sounds like there’s even more new Breezy on the way. The Jacquees announcement comes shortly after Joyner Lucas teased his own new work with Brown. Taking to Twitter, the “I’m Not Racist” rhymer compared Brown’s rhymes to Michael Jackson rapping.

“You ever heard Michael Jackson rap?” he asked. “Lol well Me and @chrisbrown got a lot heat in the oven. No bullshit tho,, breezy mite be my new favorite rapper. 😎 you’ll see.”

Brown has been on a prolific streak. Last year, he released his 45-track album Heartbreak on a Full Moon and then unleashed additional songs on a deluxe edition. More recently, he’s teased a series new songs.

Breezy and Jacquees have yet to announce a time table or release date for their joint project.