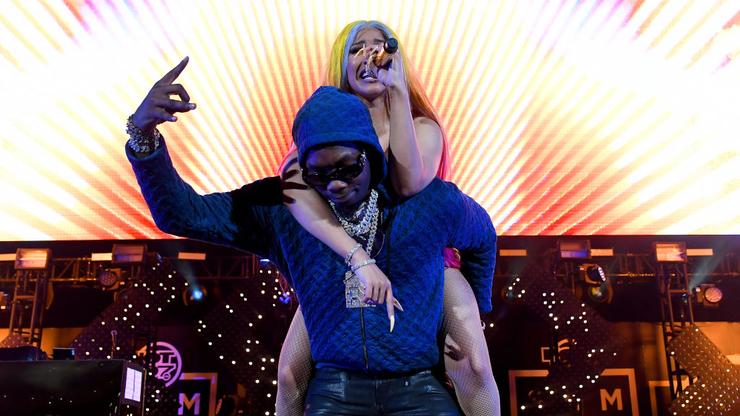 Cardi B defends her estranged husband Offset, calling him a “dumbass” but refusing to say he’s a “bad man”.

Gone are the days of Cardi B and Offset boasting about their bedroom habits and sharing TMI-laced tweets about their sex life. It looks like their relationship is officially finished with Cardi B saying that she doesn’t want to wait until the “next time” he cheats on her to act.

This lack of trust wasn’t established at the beginning of their wedding– it was brought on. The Migos rapper has been alleged of cheating on his wife multiple times and, this year, Cardi decided she had had enough.

Despite the fact that she is moving forward with a divorce, it appears as though she intends on keeping her family together, still defending her baby daddy whenever possible.

During last night’s Twitter tirade, in which she defended her team and spoke on personal matters freely, one of Cardi’s fans referred to her estranged husband as a “bad man”, which the rapper was quick to address.

“He a dumbass not a bad man,” said Cardi in a since-deleted tweet. “…Cause out of everybody that tried to steal, finesse me into working with their brand for less he got people coming for me with CORRECT CONTRACTS and never ask for a dollar or benefit like every1 else. N***as is n***a but a bad personality he not.”

In another post, she said that she doesn’t speak to Offset anymore but that she will not tolerate people slandering his name.

“I don’t give a fuck if you don’t like him. I don’t talk to him but you not going to disrespect my child’s father,” she wrote. “I will slap the shit out of you in curtesy of Kulture.. If he die, go broke, you not the one that’s going to raise my kid.”

This comes just days after she shared an image on Instagram, telling the world that she’s “single, bad, and rich”, which Offset actually liked.

It’s nice to see that there’s still love between them and the split won’t be ugly.