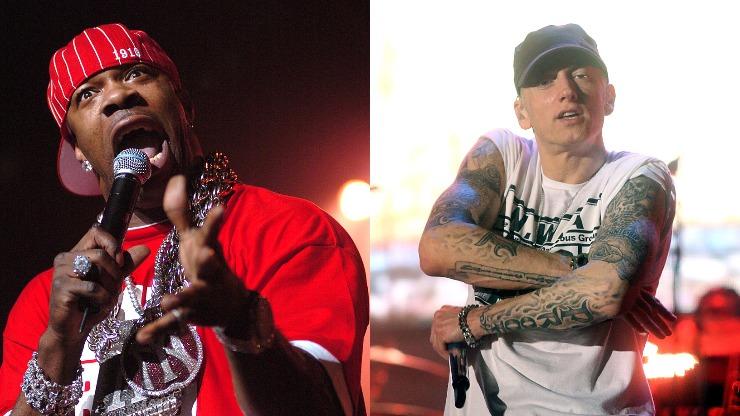 Busta Rhymes fondly reflects on the time Wyclef Jean showed him Eminem’s “My Name Is” and his windshield suffered as a result.

Busta Rhymes has been on an absolute tear of late, having recently delivered his excellent album ELE2: The Wrath Of God, at the end of October. Since then, he’s re-upped with a Reloaded version and hit the campaign trail, where he proceeded to chop it up with NME for a stroll down memory lane. As it happens, one of the questions centered around his 2000 “Best Rap Solo Performance” Grammy nomination, which he ultimately lost to Eminem‘s “My Name Is.”

There’s clearly no love lost in that department. “Em is one of my favorite MCs ever,” praises Busta, reaffirming his desire to face off with Slim Shady in a friendly Verzuz competition. “We’ve done multiple records together and even on his latest album Music to Be Murdered Bym the track ‘Yah Yah’ used my vocals from ‘Woo Hah!! Got You All In Check.’ He’s one incredible motherfucker! Wyclef Jean was the first person to play ‘My Name Is’ to me before it was even out. We were on tour together and he had a six-song EP from Eminem. When we played ‘My Name Is’, I could not believe it.”

“I went so crazy on his bus that I shattered his windshield with my head!” he reveals, providing some much-needed context as to why he once decided to ram heads with a mountain goat in the “Break Ya Neck” video. “I couldn’t believe the shit that Em was saying and Dre’s production was unbelievable. At the time, nothing existed like it in the whole game.” Interestingly enough, Busta Rhymes would later go on to make his own magic with Dr. Dre, who produced classic tunes like “Legends Of The Fall Offs,” “Truck Volume” and more.

For those looking to explore Eminem and Busta Rhymes’ chemistry on wax, their recorded discography consists of the Scott Storch-produced “I’ll Hurt You,” the star-studded and stacked “Touch It Remix,” and most recently “Calm Down,” which resurfaced on ELE2: Reloaded. In the meantime, show some support to Bus-a-Bus and stream his brand new album right here.