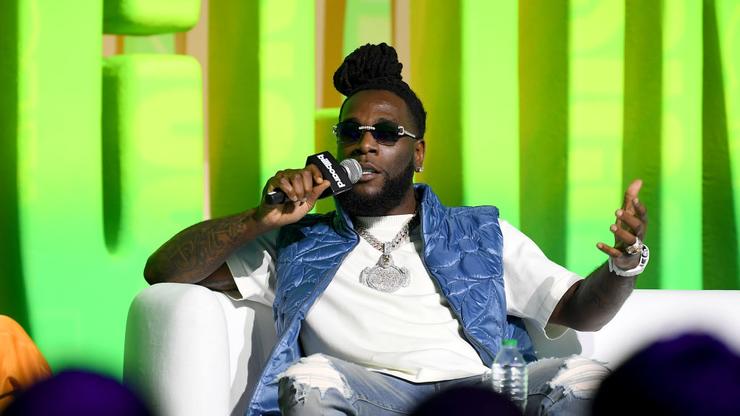 The Nigerian singer took to TikTok to share his thoughts on Jack Harlow winning “Song of the Summer” at this year’s VMAs.

Jack Harlow‘s big night at the 2022 MTV Video Music Awards ruffled the feathers of viewers and artists alike. After taking home four moon men, and winning the fan favorite Song of the Summer Award over Beyonce and BTS, viewers took to social media to share their thoughts. “A white man winning over Beyonce, BTS and Doja, VMAs be serious,” one fan wrote. The uproar from Harlow’s wins didn’t only come from viewers. The “First Class” rapper’s industry peers also seem to feel slighted by his winning streak on Sunday.

Burna Boy, who usually stays out of media drama, took to TikTok to share a video of a parade of people singing his hit song “Last Last,” at the top of their lungs. Aside from the touching video, it was the Nigerian singer’s caption that made fans assume he was shading Harlow. “Wow so many heartbroken people #LastLast #Songofthesummer,” he wrote, while the statement on the video read, “When #MTV Says Jack Harlow Had The Song of the Summer [yawn emoji].”

“Last Last” is Burna Boy’s first song to make the Billboard Hot 100 as a solo or lead artist. It’s also his highest charting song, sitting at number one on the Billboard US Afrobeats Songs chart for the eighth week. The vibrant track, which sample’s Toni Braxton‘s 2000 hit “He Wasn’t Man Enough” now holds the record of being the longest-running number one song in US Afrobeats chart history. Fans seem to side with Burna Boy’s views. One commenter shared, “Never have I got in da car and said yo throw on that new Jack Harlow but I did say put on last last I need debo and shaloy or w/e he say.”

Which song do you think should’ve taken home the moon man for Song of the Summer?