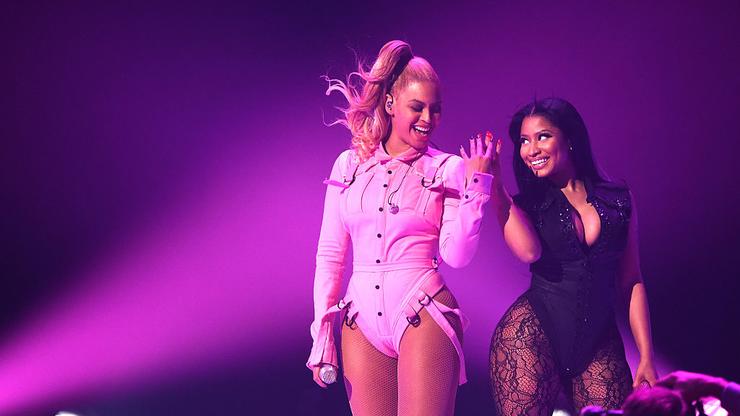 The Barb received a fresh bouquet from “Hov & B.”

Nicki Minaj is receiving lots of love for her captivating performance and speech at the 2022 MTV Video Music Awards.

The Barb took home one of the night’s most prestigious honors, the Michael Jackson Video Vanguard Award, joining the likes of Kanye West, Justin Timberlake and Beyoncè. The Vanguard, which was created in 1984 and renamed after Jackson in 1991, recognizes artists’ overall achievements in music and video. Knowing what it truly means to earn the esteemed merit, Beyoncè reached out to Nicki to congratulate her on her big night.

The “Super Freaky Girl” rapper posted the sweet message from the Renaissance songstress and her husband Jay-Z that read, “Congrats on your beautiful award. Sending you all our love. Hov & B Holla.” Nicki said of the kind message and fresh bouquet, “Thank you so much. The both of you. For everything.”

The Barb has always shown love to the Carters, both individually and as a dynamic duo in the game. During her VMA speech on Sunday, she gave a special nod to “key people” whom she considers some of her biggest inspirations, including Hov and Bey. “I want to take a second to just say thank you to all the key people that inspired me, who I think inspired my flow: Lil Wayne, Foxy Brown, Lauryn Hill, JAY-Z, Slick Rick, Doug E. Fresh,” she said. “People who gave me huge opportunities that I’ll never forget: Kanye West, Beyoncé, Madonna, Mariah Carey, Eminem, Britney Spears, Rihanna.”

Beyonce has never been shy about her love for Onika. She even gave the Queens rapper a shout out on her Summer anthem “Break My Soul (Remix).” Check it out below.