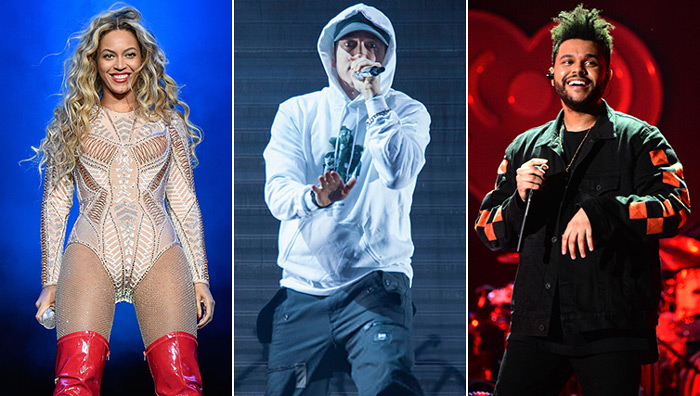 It’s ficial. Beyoncé, Eminem, and The Weeknd will headline the Coachella Valley Music and Arts Festival in an unprecedented lineup, which will not feature a rock act in any the closing slots for the first time ever.

This also marks the first time that Queen Bey, Slim Shady, and Abel have headlined the annual Indio, Calif. celebration. Marshall Mathers popped up as Dr. Dre’s guest in 2012, the Starboy has been on the bill twice before, while ‘Yoncé performed with JAY-Z in 2010 and danced with Solange in 2014.

But this is one Beyoncé’s most anxiously-awaited performances to date since she was slated to headline last year’s lineup, but had to postpone the performance due to her pregnancy.

Day 3 (April 15 and 22) boasts an equally star-studded bill, including Migos, Cardi B, Miguel, French Montana, 6LACK, DeJ Loaf, Jidenna, and Eminem, who will close out the desert fest.