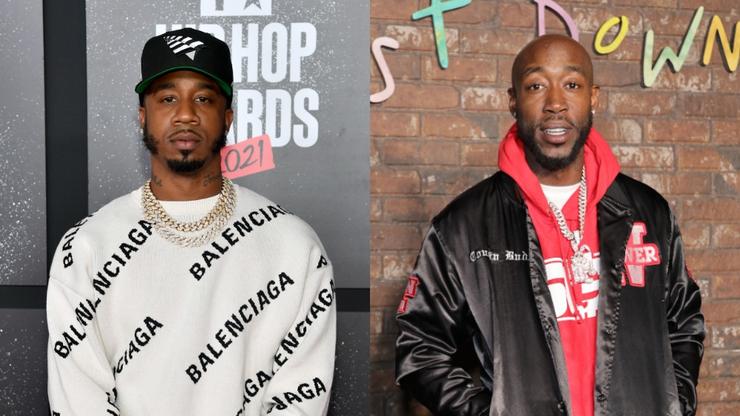 Benny The Butcher opens up about his fall out with Freddie Gibbs on “Drink Champs.”

Fans were excited about the possibility that Benny The Butcher and Freddie Gibbswould be joining forces for a collaborative project. The two established a solid rapport on songs like “1 Way Flight,” “Frank Lucas,” and more. Unfortunately, the speculation that there was tension between the two turned out to be true after they traded shots publicly on social media earlier this year, killing any possibility of collaborations in the future.

Benny recently appeared on Drink Champs where he opened up about the situation. Though he seemed visibly uneager to divulge details surrounding the falling out, he was admittedly confused by the tweet Gibbs shared that made light of the Buffalo rapper’s Houston shooting. NORE said that he thought Benny and Freddie were tight based on their working relationship and previously touring together. “It really ain’t nothin’, you know… I don’t get to, like, into, like, rap relationships,” he said. “A lot of times it don’t be real, you feel what I’m sayin’? So it’s like, I guess that n***a put a tweet up or some weird shit and I don’t know why he did that shit.”

When NORE asked if they were homies, Benny replied, “That’s what I thought.”

Ultimately, it seems that Benny is more interested on moving on from the situation, especially with his new deal with Def Jam in effect. NORE asked about what led up to the beef. Benny simply said that he’s not wasting any time trying to figure it out. “I don’t know. I don’t even care to ponder on it because this shit will get crazy if you start letting your feelings in this shit,” he said.