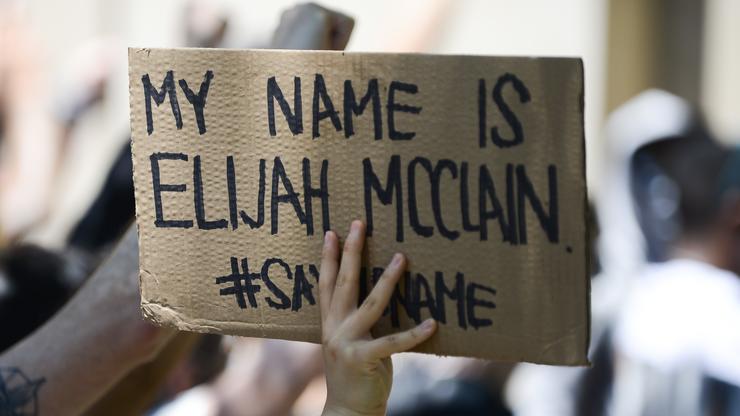 As many continue to demand justice for Elijah McClain, three Aurora police ficers are now under investigation for circulating insensitive photos that show a reenactment the carotid restraint that resulted in McClain’s death.

As if the meaningless death Elijah McClain at the hands ficers on the Aurora Police Department wasn’t hard enough to take in, it now appears they’ve dug an even deeper hole for themselves now that three ficers are under investigation in relation to a series inapproariate photos taken at his memorial site.

As CBS Denver reports, local investigator Brian Maass has confirmed sources (seen above) that three Aurora police ficers are being accused taking photos that seemed to reenact the carotid restraint hold that ultimately resulted in Elijah McClain’s death. The news sparked a series statements by both sides, with APD interim police chief Vanessa Wilson stating, “Thursday afternoon, I was apprised allegations reported to Internal Affairs by an Aurora Police Officer alleging multiple Aurora Police ficers were depicted in photographs near the site where Elijah McClain died. All involved ficers were immediately placed on administrative leave with pay in non-enforcement capacities. I immediately ordered Internal Affairs to make this investigation their top priority. This accelerated investigation was completed this evening. This investigation will be publicly released in its entirety promptly upon its conclusion. This will include reports, photographic evidence obtained, ficer’s names, and my final determination which can rise to the level termination.”

The McClain family wasn’t in the least bit pleased, issuing a statement their own that reads, “Just when we thought the Aurora Police could not be any worse, they somehow find a new low. This is a department where ficers tackled an innocent young black man for no reason, inflicted outrageous force – including two carotid chokeholds – for fifteen minutes as he pled for his life, joked when he vomited, and threatened to sic a dog on him for not lying still enough as he was dying. They tampered with their body cameras to hide the evidence. They exonerated the killers. They deployed riot police and spewed pepper gas on peaceful protestors sic] at a vigil mourners playing the violin. And now this.”

All three ficers were reportedly removed from patrol duty last week as the unresolved August 2019 death Elijah McClain continues to result in social outcry. May he and his family get the justice they rightfully deserve.