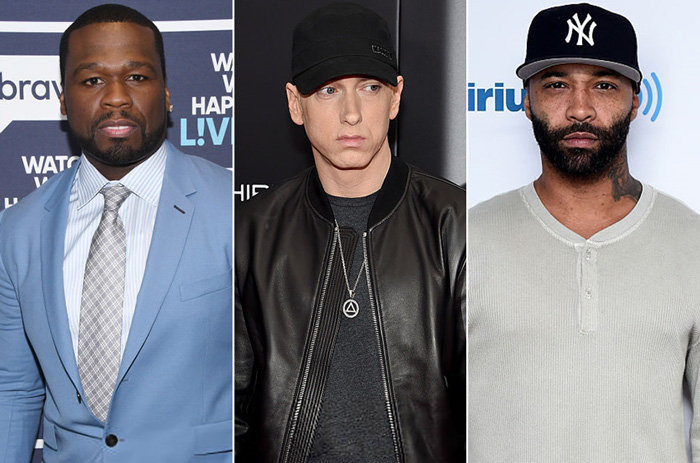 Joe Budden’s criticism Eminem has landed him in hot water with 50 Cent.

The G-Unit General issued a stern warning to Budden in response to his Revival critique. “That was a bad idea,” he wrote on Instagram. “look you got a little ass whopping coming. It’s not a big deal, you will get over it.”

50’s comments follow similar sentiments from D12’s Bizarre, who called Joe a “fucking clown.” “Never Bite the hand that feed you,” he wrote. “I never like u any way chump…man my ni**a went Crazy.” With this post, Biz also seemed to indicate that Em’s “Chloraseptic (Remix)” was a response to Budden’s harsh takes.

For his part, Budden claimed he would “beat the dog shit” out Bizarre, according to screenshots that the D12 rapper shared. He also claimed Biz “ain’t spoke to Em in at least 10 years.” While the D12 rhymer copped to that allegation, he also continued dissing Joey. “This Disloyal bitch ass ni**a @joebudden talking shit,” he added. “we should never let u come around the squad … we should let swift punch y’all ass when had the chance.”

Budden and his podcast mates have been critical Revival. “It seems way too pop-ish,” said co-host Rory. “It seemed a little lazy that he just went out and grabbed the hottest people out.” Co-host Mal added: “That tracklist does not make me wanna buy that album.” Budden chimed in, saying: “Em is a white pop star.”

Joe echoed those statements on his former show “Everyday Struggle.” “From what I know, Em, it sounds trash,” he said. “We’re looking at the tracklist] and the common folk are saying, this looks trash.”

Em seemed to point at these comments on the “Chloraseptic (Remix).” “Y’all saw the tracklist and had a fit ‘fore you heard it / So you formed your verdict,” he rapped. “While you sat with your arms crossed / Did your little reaction videos and talked over songs.”

As a member Slaughterhouse, Budden has also been critical Eminem, who signed the group to his Shady Records imprint. In 2015, he released “SlaughterMouse,” which was seen by some as a diss towards his label boss with gripes about creative differences and being left f songs. “The whole label think I’m crazy, I been peeped it,” he rapped. “No record label will ever label me / My morals ain’t for sale, can’t under-the-table me.”