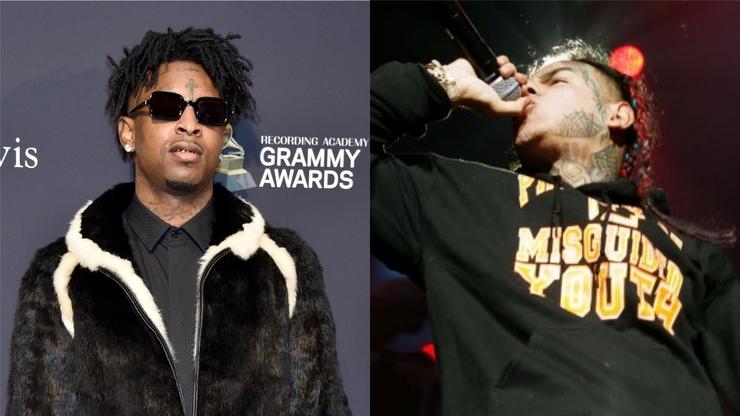 21 Savage might have indirectly said that “Snitches & Rats”, one of the songs off his chart-topping new album Savage Mode II, isn’t about Tekashi 6ix9ine but he’s definitely not rocking with the Brooklyn-born rapper.

“I see y’all talking about the ‘Snitches & Rats’ song [being] like a 6ix9ine diss song or something,” said 21 Savage on Instagram Live on the date of the album’s release. “6ix9ine ain’t the only rat in America. He’s not the only snitch in the world, man. F*ck wrong with y’all? Y’all need to listen to that sh*t though ’cause that sh*t is facts. A rat is a f*cking rat, period.”

The song contains two parts. The first is an interlude performed by Morgan Freeman, which is a highlight on the project. The second is a song featuring Young Nudy.

Despite the song not formally being about Tekashi 6ix9ine, that doesn’t mean that 21 Savage wasn’t at least firing some rounds at the rainbow-haired rapper.

Following his 70s-themed birthday party, which saw T.I., Lil Baby, Young Thug, Meek Mill, G Herbo, and more pull out their best pimp costumes, 21 Savage enjoyed another party, planned by SG Tip. For decorations, Tip set up lots of red balloons and even installed a “snitch” mannequin with a sign that read: “The wounds on this rat will never heal because when you squeal you know the deal. All rats die slowly!!!”

The mannequin was wearing one of 6ix9ine’s new merch designs. As though he had been beaten and tortured, there were bloodstains all over the figure and his clothing.

Recently, 6ix9ine has been inching back into public life, showing up in several fan photos with a new beard. He also showed off his new tattoo on Instagram, filling in his chest piece with Takashi Murakami-inspired art.